Factcheck: Is London really getting safer for cyclists? 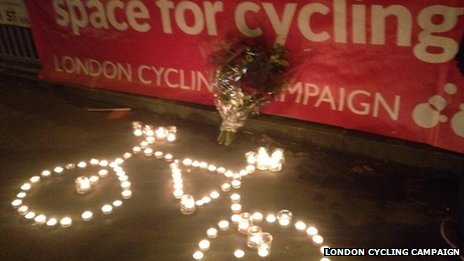 Five cyclists have died in London in the past nine days. This is tragic and shows there is still a lot to be done to make our streets safe.

But does it mean that cycling in the capital is becoming more dangerous overall? Let’s look at the facts.

The number of cycling fatalities in London remains relatively low. There were 16 deaths in 2011, 14 deaths last year and there have been 13 so far this year.

The longer term trend is harder to read with between eight and 21 deaths of cyclists every year since 2000.

But deaths are probably not the best indicators of safety. The vast majority of collisions do not result in fatalities, so let’s look at those figures instead.

Well in 2002 there were 414 cyclists either killed or seriously injured in the capital. Ten years later that number rose to 671.

That’s a big rise. But does this mean that cycling has got much more dangerous in London? Well yes and no.

But the story doesn’t end there, because for some reason, the number of serious and fatal casualties has gone up again in the past couple of years.

And while the official figures for 2012 have not been published, City Hall sources tell me that cycle trips have also stayed basically the same as they were in 2011.

Taken together, this means that the rate of deaths and serious injuries has risen again in London to the same level it was way back in 2002.

Here’s all the figures from TfL so you can see what I mean. 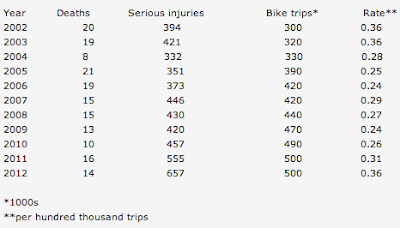 So why the big rise in accidents in the past few years? Is it a spike, or is it because things like the cycle superhighways and bike hire scheme have encouraged a lot more inexperienced riders on to the road?

Either way, it is politically a very dangerous situation for TfL and the Mayor.

Boris Johnson promised to make the “cycling revolution” the big cause of his mayoralty and this has emboldened a new generation of campaigners to hold him to his word.

Boris’s repeated response has been to claim that cycling in London is getting much safer overall. As the above figures show this is not quite true. But ultimately this is not really about statistics.

As Ken Livingstone found with the spate of stabbings in the run up to the 2008 elections, statistics mean very little when people are dying on the streets.

Cycle safety has become a big political issue and will get much bigger after the tragic events of the past two weeks.

The hundreds of people turning up for candlelight vigils every time another cyclist is killed will continue to grow, as will their call for something to be done.

That something will take time, but telling cyclists to just be a bit more careful just isn’t going to cut it.