What does Boris Johnson really think of Nelson Mandela? 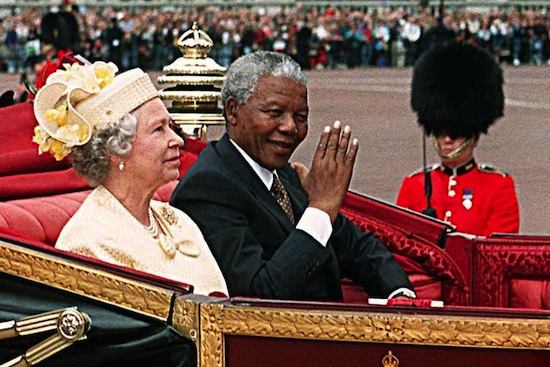 Boris Johnson has today been heaping praise on Nelson Mandela, who died yesterday.

He told the BBC that the “idea of a latter-day saint is much abused” but insisted that Mandela should indeed be canonised adding that “a great heart has been stilled”.

According to the Beeb:

“When asked about the Conservative Party’s attitudes to Mr Mandela and the ANC in the past, he said he disagreed with it but was “not politically operational” then, adding: “I never in my life deviated from the position of fervent, fervent admiration for Nelson Mandela.”

So is this really true? Has Boris always been a fervent admirer of Mandela? What are Johnson’s real views on the great man?

Well in 1997, Johnson interviewed the former president of apartheid-era South Africa FW de Klerk for the Daily Telegraph. Here’s how he began the article.

“As ye sow, so shall ye reap. Once the Afrikaner discriminated against the black man on the grounds of his colour. Now the boot is on the other foot…”

Later in the interview he added:

In both excerpts the meaning appears clear. The white tyranny of apartheid was replaced with the black tyranny of Mandela.

But did he really believe that or was he just exaggerating for the benefit of his Telegraph readership? It’s not entirely clear.

In another Telegraph interview with South African politician Buthelezi, Johnson refers to Mandela as “the sainted one”.

“The trouble, says Chief Buthelezi, is the way that the sainted one is leading the country: not just the left-wing ideology that has led to a sharp fall in the Rand, a 73 per cent rise in the professional exodus, and which the magazine Business Day says has set South Africa ‘firmly on the road to banana republic poverty’. There is a more sinister resemblance, both to the old Soviet Union and the old South Africa. ‘There is a tendency to develop towards some kind of autocracy,’ he says.”

So was Johnson simply quoting Buthelezi’s views about Mandela’s “sinister” rule, or did he have some sympathy with them? Again it isn’t clear, even from reading the whole piece.

Mandela continues to pop up in Boris’s later writing, most recently in a Telegraph column from 2010.

In this piece Boris mocks celebrities including Naomi Campbell and Imran Khan for accepting an invitation to dinner with Mandela in 1997, despite the fact that “blood soaked warlord” Charles Taylor was also invited.

“Why did they risk that most precious thing, their reputations?” he asks.

“The answer, of course, is that the man at the centre of the group portrait, and their host, was Mr Nelson Mandela, and Mr Mandela is by common consent just about the best, kindest and most gracious man on the planet. It is the goal of every celebrity to have his or her photo taken with Mr Mandela. He beats Obama. He beats the Queen. He knocks the Pope into a cocked hat.”

“With his radiant smile and his transfiguring presence, he washes away the sins of all those who come near him. It didn’t matter to the slebs that they were in the presence of an allegedly limb-chopping warlord. They were literally in the presence of a saint – or the closest the modern world has come to reproducing this ancient concept. They left reason behind and gravitated towards holiness, the sense of spiritual goodness our species still craves.”

So does Boris think Mandela was a saint for whom he always had “fervent admiration”, or does he think the celebrities had “left reason behind” by assuming that he was.

As always with Boris’s writing, it’s not entirely clear what his real opinions are.

But at the very least, his views of Mandela appear are far more nuanced than his glowing on-camera tributes today suggested.