Five paranoid authority freakouts that could spoil the Olympics

A month from the start of the London 2012 Olympic Games, It’s worth gathering together some of the restrictions, bans, and don’t you dares which seem so essential to defining the modern Olympic spirit. While these controls have been reported individually, it’s only by stepping back and considering them together that we can hope to understand the mindset which has produced them. As we shall see, it’s a mindset governed by two impulses: greed and fear. 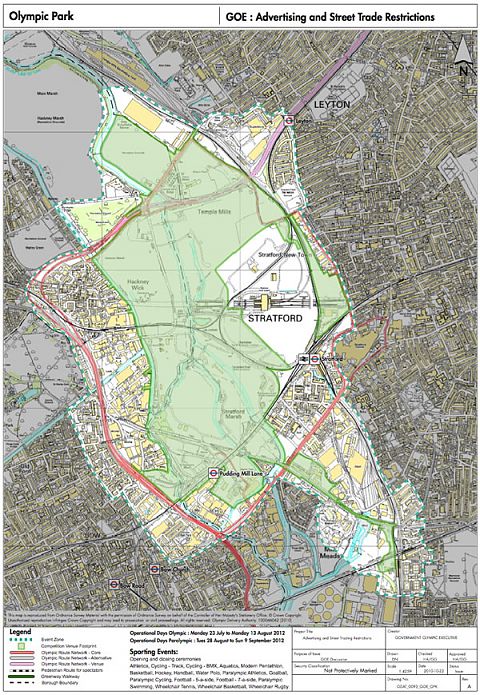 Brand exclusion zones will be in place around each of the Olympic venues. A map of each can be found on the Dept of Culture’s website here. Inside the zones, which in many cases extend beyond the venues and out into the public streets, advertising and general commerce will be policed. I use that word advisedly. These zones are a fine example of reason running unchecked into madness. It all began reasonably, in the late 1990s, as a sensible attempt to stop Nike buying all the billboard space around stadiums hosting events sponsored by Adidas. Fifteen years of brand greed and official fear later, what word is there but madness to describe the forced closure of any ATMs near the venues which are not branded by Visa? People inside the brand exclusion zone will have to queue for longer to get the money to spend on the brands which the IOC allows inside the exclusion zone. Everybody loses! Visa announced a net income of $3.5bn in 2011. What are they frightened of?

Diamond Geezer ran through some of the implications of the exclusion zone for the Olympic Park in Stratford here. An excellent post by Kosmograd alerted me to the maps and explains some of the background.

The above video, via Big Smoke, shows a Camden market trader reacting to a leaflet telling him what he can’t sell. It’s a bit slow by internet standards, so let me quote him.

“We cannot have the word “London 2012” on any piece of merchandise…somehow LOCOG own the words London 2012 – the name of our capital city and the year. They suddenly own this. Does this not seem a little bit strange?”

3. Missiles on the roof On Saturday local residents of Leytonstone and Bow gathered to protest against Starstreak missiles, like the one pictured above, being plonked on their roofs. Other batteries are planned for Blackheath, Eltham, Enfield and and Barn Hill. Missiles on homes in peacetime is just common sense, say the installers. Because what if…? Because what if…? The fear must be fed. One of the missiles’ minders, Col John Campbell, says he wants to “de-militarise this and let the sport do the talking.” But how do you demilitarise putting missiles on someone’s roof?

From the IOC’s Social media, blogging and internet guidelines:

“any…postings, blogs or tweets must be in a first-person, diary-type
format and should not be in the role of a journalist – i.e. they must not report on competition or comment on the activities of other participants or accredited persons…”

The IOC, which you might think exists to organise an event which lets the finest athletes of the world express themselves, in fact seeks control over their words. It’s perverse.

From a BBC report:

“…a spokesman for the London Organising Committee of the Olympic Games (Locog) confirmed the rules would mean the saltire could not be flown over Hampden, which is hosting some Olympic football matches.”

This is because Scotland is not an IOC-recognised country. If they let a Scottish flag fly, the logic goes, what about the flags of other non IOC-recognised countries? So reason runs to madness once again, and the Scottish flag is banned from the Scottish stadium. And Locog enforces it, and the government endorses it, because it’s in the Host City contract and don’t you see that everyone’s hands are tied? TIED BY FEAR!

Images: Map from Department of Culture, Media and Sport. Pictures from Wikipedia

See also:
Vuvuzelas, pets and oversized hats: full list of items you’ll be banned from taking in to the Olympics
If the O2 had to be renamed for the Olympics, it should have been called the Millennium Dome