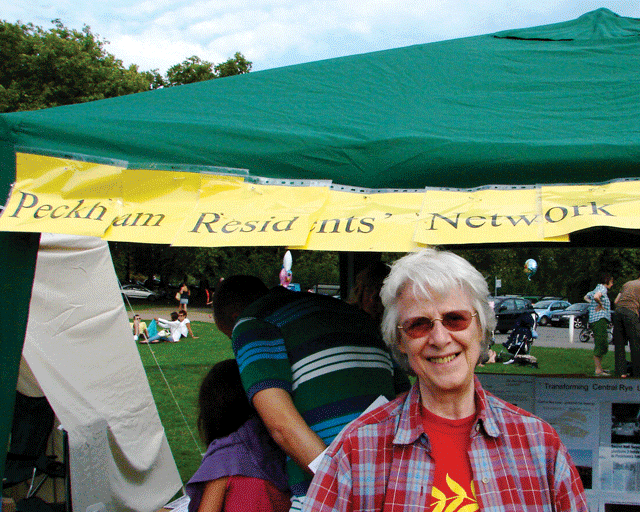 At the annual Peckham Rye Park Fete, Peckham resident Eileen Conn was busy trying to spread the word about Peckham Vision, a group aimed at encouraging informed discussion about the future of Peckham Town Centre. The bright stalls lined up on a scorching day seemed a million miles away from the riots which erupted nearby a few weeks ago, but Eileen is a long term campaigner and social visionary who, in her own words, “expects disorder”. In the centre of her makeshift stall was a large picture of the Old Waiting Room at Peckham station, a beautiful Victorian room, boarded up and forgotten for many years, but now re-discovered, renovated and waiting for a purpose. By bringing this and other issues to people’s attention, she hopes to spark an interest among the locals in the future of their surroundings. 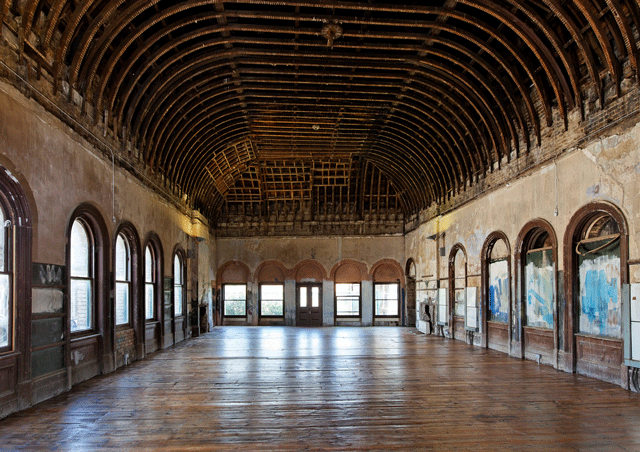 SNIPE: Could you first explain what you are trying to achieve?

Eileen: I am a local resident – and why do I do what I do? Well in the people who live in an area there is huge knowledge and wisdom about that place which is not accessible to the people who have to take the big decisions about it. What I am doing is interesting people in things, to get them together so they are more informed about what’s happening and they are able to clarify what they think. Also people need to be informed about how to put their views forward.

S: Do you think people in this area have a difficulty in representing their views on how their area should change?

E: I think just about everywhere in the country probably has. What motivates me is that this affects all of us because the decisions made by people in authority aren’t as good as they could be. Their consultation procedures clearly don’t work do they? Otherwise we wouldn’t be continuing to have the problems that we are. We do need a whole new way of people being able to be informed and talking to each other to form coherent opinions, not just little groups of people responding to consultations. We need a completely different way of working. That’s what I’m doing.

S: Why do you think think communication has broken down?

E: I think if’s a consequence of living in a technological society that’s managed by experts.

S: They are out of touch?

E: They’re not out of touch, they’ve never been in touch. The whole way of everything working has changed in the last 60 years and on the whole society is managed by technical experts – technocratic, bureaucratic experts. It’s like a sort of alien brain on top of all of us, what we’ve got to do is get the real brain, that’s us, to articulate it’s views to help the alien brain do its job better.

S: I can see that a lot of the ideas at this stall are to do with ideas for regeneration. Does it concern you that with the ideas of such regeneration it can push the poorer people out as the area gets gentrified?

E: Well first of all I don’t think of it as regeneration. It is a mechanical idea. It is revitalisation, revitalising its life spirit and that’s a really different mental shift. So the kinds of questions you are thinking about come from a mechanical way of thinking about all of this, usually about buildings and structures. We are talking about long term processes. In terms of gentrification, the social demographic has continually changed. It hasn’t happened because anyone has designed it, it’s happened because of market changes, job market changes. Most of the jobs that people have now didn’t exist when I was younger, so everyone’s changing all the time. For me, some basic things, like the cleanliness of the environment, which is terrible, can be dealt with under existing rules.

This is more about vision, about lifting people’s spirits. It’s important to change in the way authorities manage cleanliness. That would have a huge effect.

S: Do you think that would generate more pride in the area?

E: Of course it would! I remember reading an article about a 14 year-old boy causing serious problems, he went to somewhere like Kensington and was given a mentor. He’d obviously had very little experience of life outside Peckham. There were things he said that really struck home. He had grown up in Peckham and it was only when he went outside of the area that he realised things could be different, cleaner, but it had influenced the way he thought about the world. What we saw in the looting and the riots was young people who didn’t have a developed sense of their connection with their immediate environment and that’s a serious issue. If you treat your your environment in a way you wouldn’t treat your own house, that says you are careless about that particular environment. So if we clean up the grime, we can show what’s possible in Rye Lane, with the agreement of the immediate property owners. What would happen if they just cleaned it up themselves?.. forget the Council, clean it up and paint the bits that could be painted. That would transform things, I know it would!

S: ..and you think regeneration is one answer?

E: Regeneration is not a word I like. “Revitalisation” is about life, and so much has gone wrong with it because regeneration is focussed on the buildings, the physical structures and if you do that at the expense of the people and destroy relationships then we’re doomed! That’s what’s gone wrong with a lot of our policies, but I’m not expecting the Government, or the Police or the State to do it, we can do it ourselves. That’s what I’m doing, on my own as an individual.

S: But how do you persuade a shop owner, for example, to change their shop signage to be less garish or unsightly?

E: You don’t start with persuading anyone, you find shop owners who are fed up. There are shops just off Rye Lane who have tried for years to sort this, and they’ve got no affective response. There are two particular stores that are so enthusiastic to change the immediate environment. My idea is that there should be a clear design policy and every business could be told what the guidance is, so that anyone who is thinking about changing their shop fronts get good information about design which is easily accessible and understandable. If no one tells them of a better way of doing it and what the benefits would be, then how are they going to know? What they are doing is trading, not designing shop fronts. That’s what I call ‘the adjacent possible’ – do something beyond what is happening anyway. People can make these little steps if they are helped.

To find more out about Peckham Vision, visit www.peckhamvision.org