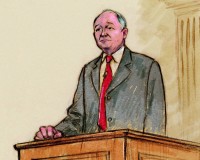 Anyone writing about London politics needs to realise that some comments are simply “beyond the pale” whilst other apparently identical comments are not.

A good recent example of this is Ken Livingstone’s labelling of one of Boris’s aides as “the Ratko Mladic of local government”.

Comparing Edward Lister to the instigators of such vicious crimes is both personally offensive and degrades the suffering of the victims of ethnic violence in the Balkans. While politicians are rightly expected to have thick skins there are some comments that are beyond the pale and should have no place in London politics.

Quite so. Ken Livingstone comparing a British politician to a Yugoslavian war criminal was absolutely not okay and has no place in London Politics.

Of course when Boris Johnson compared another British politician to a Yugoslavian war criminal that was perfectly okay and had plenty of place in London politics.

As did his comments comparing the British Prime Minister to Muammar al-Gaddafi.

And his comments comparing Ken Livingstone to Kim Jong-il.

And his comments comparing university admission officers to Pol Pot.

So in case you’re still confused let me repeat it for future reference: