Doing Feminism: Chatting About the Unspeakable With Laurie Penny 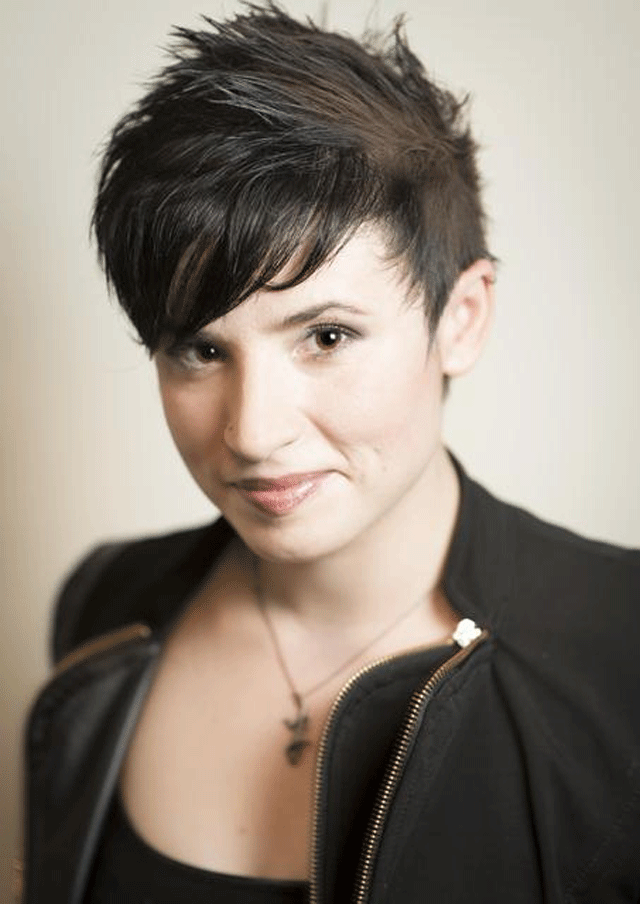 On vile internet comments, the pros of perversion, and the bullyboys of the British press.

At 27, Laurie Penny spent a massive amount of time thinking and writing about the reasons hatred towards people who don’t conform is tolerated in the UK. Her articles appear in the New Statesman, Guardian, Independent, and Vice; her blog Penny Red was short-listed for the Orwell Prize and she tweets to over 93,000 followers. In conversation, she’s a charismatic person with a great sense of humour and a wealth of knowledge about the complexities gender, class and race in modern Britain.

She describes her latest book Unspeakable Things: Sex, Lies and Revolution as a ‘fun political memoir’—it’s a potent blend of personal reflection, feminist theory, wit, anger and cultural critique sharpened into a polemic against the UK’s cultural acceptance of abuse and exclusion of women, ethnic minorities and queer people. It uses humour to hamstring the opposition (describing Men’s Rights Activists who use ‘words like “Feminazi” with apparent seriousness. Because fighting for equality was what the Nazis were really known for’) and at times poetic (extolling the virtues of online love, ‘For transsexual teenagers whispering lust and learning in chat rooms while small-town bigots drive drunk through their disappearing fiefdoms’).

‘I guess my ideal audience is weird 16 year-olds of all kinds, really,’ says Penny. ‘I ended up writing the book that I needed when I was a teenager and odd and didn’t find much to speak to the kind of life I wanted to live, and the kind of life I suspected people around me might want to live. So the people I found who are most raving about it right now—at least on the internet—are either sort of hardcore feminist people or just people don’t fit in, or people who can’t fit in, or people who the narratives of gender and power have never worked for’.

‘It’s quite gender theory in places, but I always try to phrase that in language that everyone can understand’, says Penny. ‘ I’m kind of allergic to academic language. I love my friends who are academics and I’m about to go back to college myself, there’s definitely a place for that, but I think feminism and radical politics in general need to come out of the universities. I think the language of radicalism has become overly obfuscatory (if that isn’t wanky academic language itself!)’.

‘Some of my favourite political academic writing, I read it and think, “This is designed to make the author sound clever”. And the author is clever, incredibly clever, but I feel like what good political writing should do is make the reader feel more clever, feel more empowered, feel like they have more knowledge’.

Despite the limitations of academic language, Penny looks forward to studying through a fellowship at the Nieman Foundation for Journalism at Harvard in 2015, and says she’s happy to have an opportunity to ‘get out of the maelstrom of comment and the British press for a while’. As a public figure, she has been the target of hateful vitriol online, sometimes violently misogynist, which she describes in the book’s centrepiece chapter ‘Cybersexism’.

‘Obviously things like bomb threats and direct threats of rape and violence are criminal matters and should be referred to the police’, says Penny. ‘But there’s no way to regulate that kind of thing—it’s never just one person. One person stalking and harassing you online is a problem, but twenty people doing it: what is the way to prosecute that or define it as a crime?’

‘It’s something that evolves out of a certain milieu that’s about performative misogyny. Sexism performed, if not for other men, then for a culture of patriarchy. I think it’s about creating an environment where that sort of thing is no longer socially acceptable. And that’s one of the reasons why I think talking about it is so important, and talking about the way we experience it’.

‘The idea that the relative anonymity of the internet—I say that because it’s actually quite easy to find some of these people, they don’t cover their tracks very well—is that there’s this removed social space to orchestrate to organise these kind of hate mobs. And people are very frustrated and angry: they’re angry at women, and they’re angry at immigrants, and they’re angry at all the people they’ve been told have taken away their privilege and power. Internet comments provide an outlet. Of course, the internet is much, much more than vile comments. Part of the reason that I wrote this book is to identify where sexism comes from, and I think that it comes from a slightly different place right now: a sense that something’s been taken away. That backlash is really important to name, I think’.

But as troubling as online comments can be, Penny finds that the most vicious commentary often appears in the British press itself.

‘Some of the most upsetting attacks I’ve got have been from people actually writing columns in the mainstream press,’ she say. ‘This is not anonymous commenting, this is people with a byline, it’s the opposite of anonymous. Particularly in Britain, there is a real culture of bullying in the press. There’s a culture of bullying women, and minorities, and welfare claimants, and people of different ethnic backgrounds, and women again … I think Britain in particular is a culture where bullying is normalised.’

Penny feels that this type of journalism is exacerbated as media outlets’ current struggle to make profits in the digital age.

‘Class-hate and sexism is pretty cheap to produce. You just dig into the nasty bit of your psyche and expurge what comes out. You don’t have to go to a place, or a do an investigation, or do some research: it’s really, really cheap. This is why shock-jock columnists—and I include myself in that to some extent—it’s why we still have jobs. If we’re good at what we do, we’re designed to attract a readership and secure a readership. And that’s both powerful and worrying. Though, I try to use my column as a weapon for good’.

In calling for a cultural shift in Unspeakable Things, Penny sees economics and financial exclusion as key obstacles. She is particularly critical of neoliberalism, the economic system Joseph Stiglitz defines as ‘the fundamentalist notion that markets are self-correcting, allocate resources efficiently, and serve the public interest well’.

‘I’m talking about the cultural logic of neoliberalism, which assumes that every aspect of human life has to collapse into the logic of the market,’ Penny explains. ‘It’s a logic of a market that’s neither regulated by nor interested in the state. And neither regulated by nor interested in any notion of positive human relationships. Neoliberalism is extremely efficient at subsuming its own dissent. This is why I talk about ‘neoliberal feminism’. The basic ideas behind feminism in the 70s and 80s were extremely socialist, usually, but now we have this feminist logic of “lean in”, “all you have to do is try a bit harder to get the house and the husband and the baby, and the nanny, and the job in finance or politics”. This notion of “having it all”, that feminism is a programme for achieving a certain kind of lifestyle. Or, that’s one definition. I’m not the kind of person who’s like, “There is one way to do feminism” ‘.

I asked Penny if a danger there of criticising the way that some women want to live their lives rather than focusing on sexism and misogyny as cultural problems.

‘I meet women in their 30s, 40s, 50s, who are often coming out of marriages, or looking at where their life’s going to go in 10 or 20 years, who are asking again what it was all for? And I think that has to be allowed. This is not about saying, “Women who do this are awful, and terrible, and we hate them”, it’s not that at all. I know a lot of people who are definitely on that programme whom I respect a great deal. It’s not about judging other women, it’s about judging the lack of options, basically, for personal happiness and the way you can live your life’.

Unspeakable Things makes brazen efforts to challenge the stodginess of the status quo and efforts to exclude certain lifestyle, at one point writing that ‘“waiting until marriage” is now seen as unusual, a minority lifestyle choice, almost a perversion, which of course it is, and always was’.

Penny explains: “I think Dorothy Parker says, “Heterosexuality isn’t normal, it’s just common”. When I say that marriage and monogamy are a perversion, that’s not a criticism! I’m pro perversion! I’d say that I’m a pervert in many ways. I think it’s important to understand that there is no normal. There’s no such thing as one way that life and love should be organised. And as that lifestyle becomes more and more unsustainable, and more and more unattainable, I think it’s useful to talk about that kind of lifestyle as a ‘lifestyle choice’ rather than the default. If you would like to get married to someone of the opposite sex to you and have kids and have a quote-unquote traditional relationship, that’s fine: just so long as you understand that you’re a pervert just like anyone else. Don’t you think?”

Penny acknowledges that there are limits to polemic, and having finished ??Un?speakable Things says she wants to explore writing fiction, taking inspiration from authors like Ursula Le Guin, Neil Gaiman and Terry Pratchett. But whatever form her writing takes, it is safe to assume it will continue to try to challenge readers about the need for social change.

Penny is adamant that, as she writes in the outset of Unspeakable Things, ‘feminism isn’t an identity. Feminism is a process’.

‘Feminism is something that you do as well as something that you are. That’s why I’m not so fussed about feminism as an identity—it’s like “Laurie Penny is a feminist”, but [at times] it’s like, I’m just hanging out in my pants, I’m not really doing any feminism. I’m kind of “doing feminism” talking to you. This is sort of propaganda’.

As we finish our conversation discussing vegan cooking as a kind of witchcraft and trying to think of a vegan alternative for eye of newt (probably beans). Propaganda or not, Penny makes a compelling argument that feminism is something we should all be doing a lot more of.

Unspeakable Things: Sex, Lies and Revolution is published by Bloomsbury.