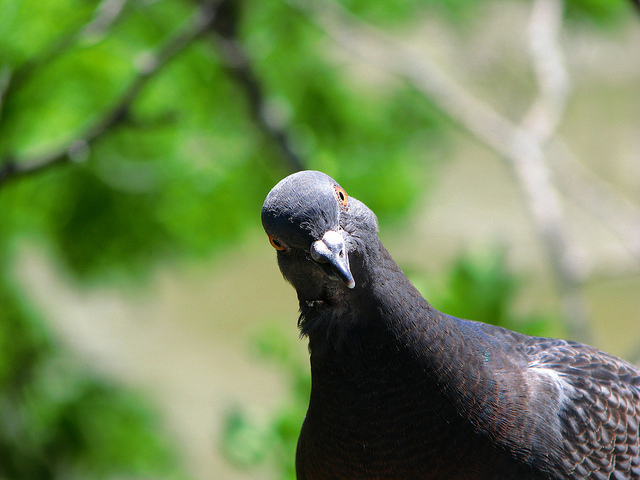 Shortly after breakfast this morning, as I flew over your man-city of London, I realised what it means to be a pigeon in this world.

You have indeed fucked me over for the last time.

To be honest, I’m not even sure what it was that did it exactly, because I ate a lot of shit yesterday (not actual shit), but I suspect it was a kebab, and it must have had some wrong ‘un chilli in there, or garlic sauce; whatever it is you filth eat. (Ethnic foods are a scourge of city-pigeon life. But this is only one of your many misdemeanours.)

It was, yeah, about 10 am, my little belly wasn’t feeling right, that much was obvious. It moaned strange and disturbed gurgling noises as I glided over your dirty river. Naturally, I thought it best to go land on the South Bank and sort myself out with some crumbs. Stabilise. Get my bearings. But I was still mid-air when my gizzard decided to unleash itself.

It thundered out a warm jet, a bit of white close to cream cheese and the rest a neon-korma yellow that splashed across the concrete just by the new Foyles, home of your commodified human scribblings. Near Festival Hall! It wasn’t nice but it was a relief and looked like something one of your teenagers would sick up outside a pub on a Thursday evening, outside Wetherspoon’s after Curry Club. Unfortunately it did not strike one of your younglings.

Strange that it took me an unfortunate episode of digestive malfunction to realise: Man has ruined us for long enough. This splash of slop represented the final straw; a harsh diarrheality check. So I’m partly thankful for this wake-up call so serendipitously befallen upon me. I only wish it had befallen on one of you.

After the embarrassing incident in the air over South Bank, I winged it over to Trafalgar Square. I still hadn’t cleaned my leaky vent by then. A bit of wet was still on my tarsus. So when I got there my fellow aviators eyed me sideways and asked me where I’d been. (I don’t hang out at the Square no more. Got a bit too hip for my tastes. It’s a young bird’s game over there. I like it South of the river where a different kind of two-leg is willing to donate seed and chips and whatnot; your tourists who haven’t quite grasped the concept of feeding my flock. But anyway, I’m not here to fraternise with you bipeds. You make/made me sick.)

I told them I’d been out last night, in Vauxhall, had myself a few drinks, sucking them up jolly and fine, then went and got myself a bite to eat before getting some kip under the bridge with this fit bird I been seeing. Anyway, the fellas caught eye of my claw and asked me what the rotten smell was. I raised my feathers and presented to them my soiled cloaca. They gasped. Some cooed. That bit was confusing. But suffice to say, they weren’t happy. It turns out the same thing had happened to Marty last week.

Anyway. I gathered a few of the willing and we embarked on our secret crusade, to re-carpet your absurd habitat a crude yellow-white. Some of the others shouted “Rock Pigeons of the World, Unite!” as we took flight. I didn’t quite agree with that, but I let them off because they’re young squabs and don’t know what’s what in this world yet.

But let me clear something up first, before I tell you about our covert operation.

We’ve been here longer than you. Not that that matters, to you or to us. We were willing to share. We’d conquered the land and the seas all over this fine Earth. I have brothers and comrades as far as you can imagine. Stories you wouldn’t believe. But what have you done? Only fuck it up, is what.

The Slaughter of the West Midlands was fine. Trapping and murdering us for sport, I let that one go. You people need your hobbies. And anyway, I don’t agree with some of the policies my kind has carried out up there. Delivering messages, racing, and performing in Newcastle-based children’s television series’ is not quite what our ancestors had in mind (Geordie Racer is a disgrace to our once-respected species. But the BBC headquarters will get theirs. ‘White City’ will take on an entirely new meaning when we’re done with it). OK, the demise of the Passenger Pigeon did ruffle my feathers slightly, I’ll admit. Feeding us to slaves and that. But that was way back when. We had an agreement with you walkers then.

But like I say, none of these things had quite got me to this, my current level of avian outrage. It was the shits that did it. And now I’m going to squirt long and hard from this vent onto your sickly ornithological prejudices.

Why you hate us for living, I’ll never understand. Tesla had a thing for us; he was alright. But ‘rats with wings’ I hear you say. You are pigs in clothing. We don’t spread disease to you vain and arrogant mammalian money-whores. Of course not. It is merely your puny-brained paranoia. Though it would be good if we did.

You think it’s funny how we walk, how we look? You are bastards. Look at yourselves. Loping in your ridiculous shoes. Trotting in your heels. Running for buses that have just got a fresh lick of my paint. Running around like headless chickens. Yeah, we have that phrase too. Kind of racist if you think about it. But chickens are idiots. Even you have no respect for them despite their cooperation plopping out eggs; fools for man’s breakfast. And dirty collaborators.

So now we will make you taste our cold flying muck. It will rain down on you invisible and splatter in silence. No longer will you suggest it lucky that your lips have been stained with the white of pigeon bum.

And we will start in Leytonstone, the home of your propagandist Hitchcock. Be warned. We have gall and we will show it.

I guess I’m what you primates would call me, a terrorist. But you gave me this diarrhoea. All I can do is aim it at you. Man.

We will take down all who fly in our faces. And all faces will fly into our faeces. Man, pigeon, animal. You are all the same now. Linnaean taxonomy be damned. No discrimination between you exists. We will drop our acid bombs of watery hell on all your soppy faces.

And you will beg us for mercy with your hands raised up to the skies.

Then we will shit on them too. But you will have two options: Warm or cold. The choice will be yours.