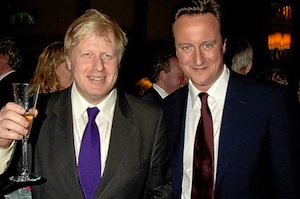 Boris Johnson’s many public rows with David Cameron are agreed by both parties in advance and are part of a strategy to paint the Mayor as independent, a government insider has claimed.

Writing in The Telegraph Cameron insider Benedict Brogan claims that:

This is, in fact, an agreed strategy rather than a unilateral declaration of independence. Some time ago [Boris Johnson] came to an understanding with Mr Cameron and Mr Osborne – who oversees Tory election planning – that gives him permission to defy them on policy. Both sides recognise that to win, the Mayor must separate himself from the Prime Minister and even at times beard him. In the near daily exchanges of text messages between the three, there is an informal understanding that when Boris plans to go off the reservation, he will alert the high command.

In recent months Boris and Cameron have grabbed the headlines with rows over housing benefit cuts, sentencing policy, Crossrail, aviation policy, devolution, the 50p rate, immigration, and many more.

These rather loud disagreements are usually followed by much quieter retreats with very little long-term damage done to either party.

As Brogan points out:

For all the tension those outside like to invest in their relationship, the Prime Minister and the Mayor of London get on surprisingly well… Mr Cameron told the Mayor: “Just in case it needs saying, you know that not only do I want you to win next year because we are friends, but I recognise that there is no way you losing would be seen as anything but a disaster for me.”

The media love stories about political “splits” and Londoners love independent Mayors, so what better way to win re-election than to stage the former and feign the latter?

So far the strategy seems to be working rather well.