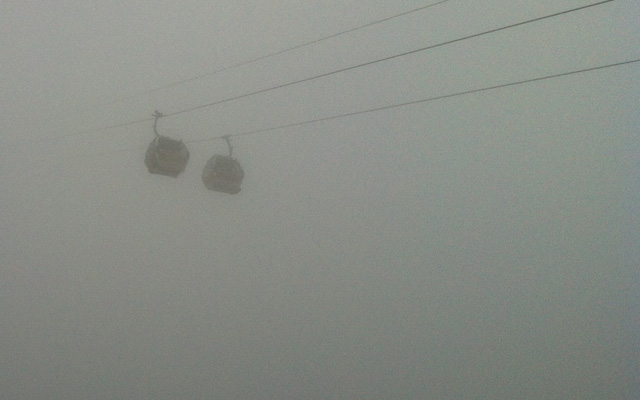 The figures also detail a sharp drop in usage compared with the same week last year, with just 6,266 trips made on Sunday 19 October, the week’s busiest day – compared with over 16,180 on the equivalent Sunday in 2012.

The Scoop used the Freedom of Information Act to obtain a detailed breakdown of usage during the week. Just as we did for the same week in 2012, we asked for hourly usage figures between Saturday 13 and Sunday 19 October.

23,029 journeys were recorded that week – well down on the 42,463 a year previously. The sharpest drops were seen at the weekend, indicating the cable car’s novelty as a tourist attraction is fading.

Indeed, the cable car’s second busiest day that week was Thursday, with 3,521 journeys, a figure likely to have been boosted by a teachers’ strike that day. Across the week, 468 students and teachers were carried as part of a schools’ scheme, with the pupils charged £1 and teachers travelling free.

On top of the four regular Oyster commuters, just 18 multi-trip passes – allowing users to pay in advance for 10 journeys across a year – were sold, compared with 41 last year.

Weekday use of the cable car remained roughly the same, at 13,638. But if City Hall is looking for good news from the passenger numbers, then more people are using the cable car in the early morning – albeit from a pitifully low base.

Just nine people used the cable car between 8am and 9am on the Sunday, a low repeated between 7-8am on both the Monday and Saturday. But that’s far more than the three passengers recorded in the Emirates Air Line’s lowest hour last year, and more than the number of passengers making the equivalent journey on the Tube and DLR to or from North Greenwich.

There are also more people using the cable car in its final hour of operation, after 7pm each day, which may be down to TfL placing staff at North Greenwich station each evening promoting it to people heading to shows at the O2.

Travelcards and Freedom Passes are not valid on the cable car, with Oyster card-carrying passengers charged £3.20 each way to use it. TfL has rebuffed calls from London Assembly members to include it in the Travelcard scheme.

TfL said in a statement issued alongside the figures: “Passenger numbers fluctuate due to a wide range of factors from week to week, however overall numbers this year are in line with forecasts.

“Since opening in June 2012 the Emirates Air Line has carried nearly three million people and as a vital new crossing in east London it continues to play a key role in attracting investment to this strategically important part of the capital.”